The media and the informants have been generating the ‘red herring’ of White Supremacy around Bill’s case with the American Front – this includes not only the media, but also the informant who posts rubbish on VNN. Both of them have mentioned the document, deliberately out of context to obfuscate the entire legal issue with the issue of ‘racism’ – which  is not part of the case.

Discussion of the whole issue is irrelevant to the case at hand, and more importantly by people focusing on this comment, they are deliberately distracting readers from the rest of the letter – in which Bill says why he is not associated with anyone from the American Front. This applies not only to the media, but also the informant following Bill around online by postings items which are quite bluntly, obtrusive diversion tactics and deliberate insertions of misleading content.

There is nothing I can do to prevent myself from finding this funny. Bill had been complaining about some dufus in the cell next to him,  and as I see from the article he is indeed an imbecile of the royal order. I’ve always thought the worst part of prison would be being unable to avoid idiots – this verifies my suspicion.

“A disbarred lawyer who represented himself at his shoplifting trial was unable to persuade jurors with an emotional closing argument that quoted the Bible and Teddy Roosevelt.

Jurors in Roanoke, Va., deliberated for just under a half-hour Tuesday before convicting {name omitted} of petit larceny and obtaining money under false pretenses, the Roanoke Times reports. He was accused of taking batteries and other items from a Kroger store, then trying to return one pack of batteries for a store credit.

The story says J. opted for a “highly unorthodox and often combative approach.” During voir dire, J. asked potential jurors if anyone had “a mental infirmity that prevents them from understanding really deep intellectual stuff.” He subpoenaed several character witnesses, including a former neo-Nazi leader who is awaiting trial on federal charges and did not appear. He cross-examined a security guard for more than an hour, trying without success to get the witness to admit to drug abuse, alcohol consumption and racist statements.

At one point, the presiding judge, William Broadhurst, said he had bent over backwards to let Jones represent himself, but “I’m beginning to see the folly in that decision,” the story reports.

In closing arguments J. appeared to break down, crying loudly, “Sometimes I don’t even know why I do what I do, but I do it.”

J. was disbarred in 2008 and convicted of embezzlement in 2010, the story says. He received a five-year suspended sentence and probation for that crime.”

Did I get your attention with that title?

What we have here is a report from a private investigator hired by Bill White in the Roanoke case, which was presented as evidence on his behalf.

Due to the removal of  personal details the content may be somewhat difficult to understand or follow. Bill was insistent that this be put online though to help demonstrate his innocence, but personal details had to removed for his own protection.

I have finally managed to procure a copy of one these emails – the Anti-Defamation League has one online. However, because it  is the Anti-Defamation League, one has to query the validity of the claim since they are obviously a politically bias site in favour of Zionism which specialises in (ironically) defaming anyone who has a political opinion opposite to their own. As such Bill White is obviously going to be a political target of theirs and therefore the veracity of any statement by them has to be taken with more than single grain of salt.

There doesn’t appear to be anything in the message which links it to Bill White, and the full message is truncated, indicating there is more which is not displayed for some reason.

Still looks like the handiwork of a single troll to me, not anything organised and  the individual in question very likely had no intent to do anything but type on the internet.

I’ve seen hundreds of people type stupid rubbish over the internet – and not a single one of them has ever done anything but exercise their fingers in random acts of unwarranted machismo. The question here is not just a matter of who sent the messages, but also one of: How seriously can we take internet trolls? I’ve seen people type far worse than this – but to what extent can it be taken seriously? I think that if one sweeps through the hyperbole and media rhetoric, they will discover that whoever sent these will have had neither the intent nor the capacity to enact the content.

I believe that all we have here is an incident of web trolling, regardless of who or what sent it. 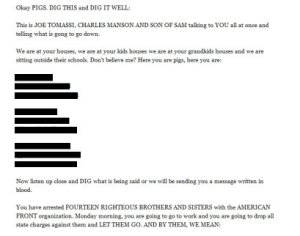 Alleged email sent by Bill White, supplied by the Zionist Anti-Defamation League, who for some reason have copy when everyone else (including Bill White) does not. May be fraudulent and the message has been edited by them.

I found the original post on the Southern Poverty Law Centre website where the page mentions  ‘the racist right’  (now believed to be solely the work of one individual it seems) trolling people. This relates back to ‘correspondence’ (if that is the appropriate term for it) sent around May 2012, and seems to have been under investigation by the FBI since June last year according to this.

From the looks of things the author (whomever it may be) is using the ‘royal we’ – and it is most likely just one person gone wild over the keyboard from the samples provided. No serious group or individual would ever act like that and it does have the look of  a ‘bad joke’ at first impression.

The problem here lies in the fact that the FBI took two things far too seriously: Firstly the American Front, who lacked the cranial capacity to be a danger to anyone except themselves, and secondly some weird person who then appeared from nowhere and sent ‘correspondence’ (and I use this term very loosely) to a whole pile of places and seems to have generated bizarre and random comments, which to be honest look more like trolling. Because they took the first batch of weird guys from the American Front seriously, they had to take the ‘correspondence’ from the second guy who appeared online seriously. So they FBI apparently thought it was a major incident of domestic terrorism caused by the American Front from the looks of things, before they decided it was only Bill White filling in holiday time from Mexico. Bad luck for Bill.

And there are more articles about this online in the media dating back to June 2012 – it seems there was quite a kerfuffle in the news, because this ‘correspondence’ (re:trolling) was believed to be connected to the terrorist activities of the American Front.

In other words: major bad luck for whoever did the trolling because it was taken far more seriously than it should have been due to the American Front connection, and also it appears to have been a massive waste of time for the FBI who thought it was a real incident/threat. Rather unfortunate on all fronts it appears. The moral of the story is: Trolling is bad.

Apparently the original ‘correspondence’ is  online at the Anti-Defamation League, Virtual Jerusalem: The Place Where Jews Click and a yahoo.com article, “American Front: Terrorism in the United States.” – as yet I haven’t discovered these yet.

The original article at the SPLC does not mention the ‘correspondence’ was sent by Bill nor that was suspected of being sent by him. In fact it looks as if they originally suspected someone connected to the American Front, not Bill White.

Here are the links to the original news articles in 2012 where Bill is not mentioned and this is thought to be the work of some group associated with the American Front: 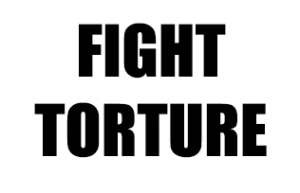